CONFRONTING THE HEART OF A CRITIC

GOD LOVES US ALL

Saudi Arabia’s sovereign wealth fund has committed to spending at least $40bn annually in the domestic economy over the next five years as it prepares to break ground on its latest mega-project.

Yasir al-Rumayyan, governor of the Public Investment Fund, told the Financial Times that after 2025, “these amounts, maybe, will grow higher” as he described the investment vehicle becoming the “engine of economic growth” in the kingdom. The PIF invested about $15.5bn in the kingdom in 2019.

Mr Rumayyan was speaking days after the PIF unveiled its most ambitious project to date — the creation of a futuristic, carbon-free city that will stretch along a narrow, 170km strip of Neom, Crown Prince Mohammed bin Salman’s flagship development. The cost of infrastructure for the city, known as “The Line” is expected to be between $100bn and $200bn, with the PIF its cornerstone investor.

Mr Rumayyan said financing for the project would come through a combination of bonds, loans and equity from the $400bn PIF, as well as outside investments.

He said the PIF “had a lot of cash” on its balance sheet, citing $40bn the fund received from the central bank last year and proceeds from the initial public offering of Saudi Aramco, which raised $29bn after listing 1.7 per cent in 2019. The fund is also receiving $69bn from the sale of the PIF’s stake in Sabic, the petrochemicals company, to Saudi Aramco, although that is being paid in tranches over many years.

As well as developing Neom, the PIF is the anchor investor in two other so-called “giga-projects”: Qiddiya, a more than $15bn sports and entertainment complex, and a Red Sea tourism development that is expected to cost about $10bn.

The fund, which has a dual mandate to develop the economy and invest overseas, has also established more than 30 companies in the kingdom.

The PIF insists the megaprojects are proceeding, despite Riyadh being forced to slash spending and impose austerity measures as the world’s top oil exporter has been hit by the twin shocks of low crude prices and coronavirus.

There has been scepticism over Prince Mohammed’s highly ambitious plans for Neom, which the crown prince announced in 2017 as a $500bn project that would be spread over 26,000 sq km on Saudi Arabia’s Red Sea coast, and link in to Jordan and Egypt.

Analysts have also questioned how the kingdom will fund all Prince Mohammed’s grandiose schemes, which are part of his Vision 2030 plan to modernise the conservative kingdom.

“It’s very difficult to see how the money stretches out, not only to go into Neom but into all the other megaprojects and ambitions they have,” said an executive based in the Gulf. “If they get to half of what they are expecting, great. But at the moment there’s a credibility gap between what is being said and what is being done.” 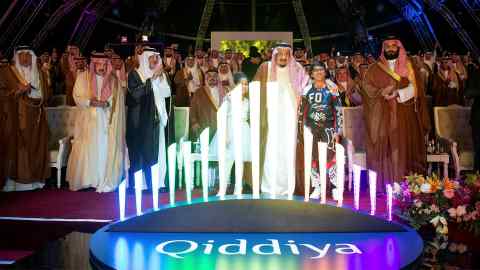 In the first months of last year, the fund used the market turmoil triggered by the coronavirus pandemic to invest at least $7.7bn in stakes in a host of US and European blue-chip stocks. But it later sold down about $3bn of its US holdings.

Mr Rumayyan said foreign investments accounted for more than 20 per cent of the fund’s assets under management, up from less than 5 per cent four years ago.

“The percentage will stay at the level of 20-30 per cent internationally. But remember our aspiration is to increase our [assets under management] from $400bn to $2tn in 2030,” he said. “So we are not going to pull back on our international [strategy].”

He dismissed scepticism about “The Line,” which is supposed to create 380,000 jobs, add $48bn to GDP by 2030 and have an autonomous, hydrogen-powered, underground rail system.

“You have PIF behind it [and] you have the political will behind it,” said Mr Rumayyan.

He cited a $7bn venture between Air Products, a US company, and Acwa Power, a Saudi firm that is 40 per cent owned by the PIF, to develop a power plant for buses and trucks.

But others are still unconvinced.

“With all these projects, until there is a little more than a publicity video there’s not going to be a lot of people taking them seriously,” the Gulf-based executive said.